The LED lighting market is hot and very competitive. From relative newcomers like Cree, Acuity Brands, and OSRAM, to well-known brands Koninklijke Philips and GE Lighting, the fight for market share is intense.  Growth potential is high. We project the LED market’s CAGR (compound annual growth rate) around 45% through 2016. Consequently, risks of oversupply and subsequent profitability declines in the face of downward price pressures bear watching for investors in smaller firms and/or firms with slim margins.

One of the key factors contributing to this market growth is the declining Average Sales Price (ASP) of LEDs. The global Chip on Board LED (COB LED) market has also been witnessing the increasing demand of COB LED in general lighting applications. However, fluctuating global economic conditions could pose a challenge to its CAGR, as well.

Demand for LED lighting will surpass that of LED backlight during the beginning of 2014, according to a recent report by J.P. Morgan:

This is sure to attract more consumers to replacement LED bulbs via its economic and ecologic benefits. 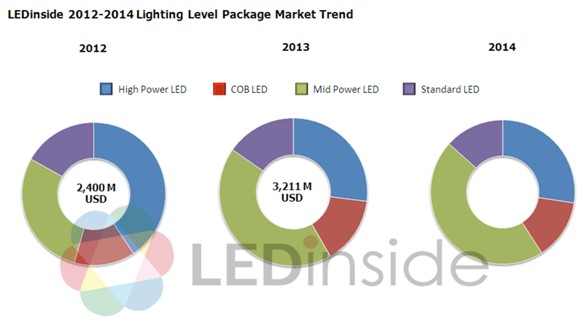 Revolution Lighting Technologies (RVLT) is a firm emblematic of the wider LED narrative for new entrants. With revenue of $15 m, net income loss -S19.53m and their market cap is $259.96m the market for their shares appears way ahead of itself. Yet this new firm is wisely using its pricey stock to make acquisitions to challenge bigger players with market caps measured in the billions of USD.

Sales momentum proceeds unabated. New York’s largest commercial property company, SL Green Realty (SLG) is one of the company’s key customers. SL Green has awarded two orders this year – an order for 1,000 LEDs  for a Times Square commercial property in March followed by an 8,000 LEDs order in December after large purchases in 2012.

As one of the smallest players in the industry, RVLT’s exposure to any potential price war could hurt the already vulnerable stock value. And, signs of one are already visible, with both Cree and Philips now offering sub-$10 LED lamps. As prices fall, RVLT has few good options but to follow suit, which will directly hit its strong gross margins from 2013.

As awareness about energy efficiency ever-growing in nations across the globe, the LED lamp investment thesis has great prospects. RVLT may be well poised to capitalize on these trends. But, with nil profits and cash flows, shareholders need to be wary of dilution from additional equity issue to raise capital for funding growth. In sum, at the outset we thought that valuation was fanciful for the long and mid-terms and still do which is why we did not add it to our Leading the LED Motif over 2013. Though we did miss the tremendous upside in 2013, we think the fundamentals make the probability of a pullback in 2014 very high and a strong sell-off not unlikely.

Fund Balance sees excellent opportunities in the private equity, early stage space LED manufacturers. One start-up firm we work with closely  projects $19 mil net income in its first year. Our Year 3 sales are projected to be $19 mil with net income of $700K on a $ 2.5 mil raise. 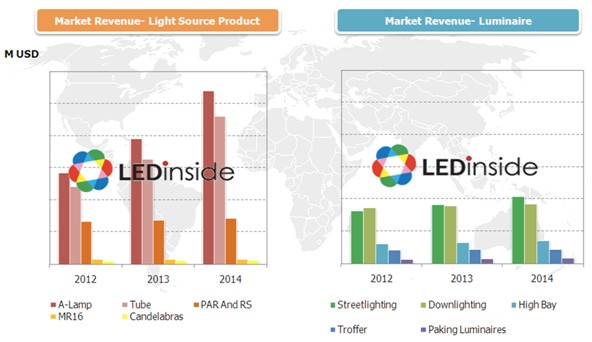 Light-emitting materials will encounter rapid change in 2014.  From Smartphones to touchscreens they are key to the future of human-computer interaction. These materials are consistent with sustainable investment and business development goals as these materials consume less power than standard LED products and share in the durability.

Active matrix organic light-emitting diode (AM-OLED) entered the display panel market when Samsung Display started operating its large-scale mass production facilities in 2008. Since then, Samsung Display has been the leader in the AM-OLED market expansion. In particular, AM-OLED displays have been well received by smartphone manufacturers, achieving noticeable growth in products ranging from the high end of 3 inch to 4–5 inches. 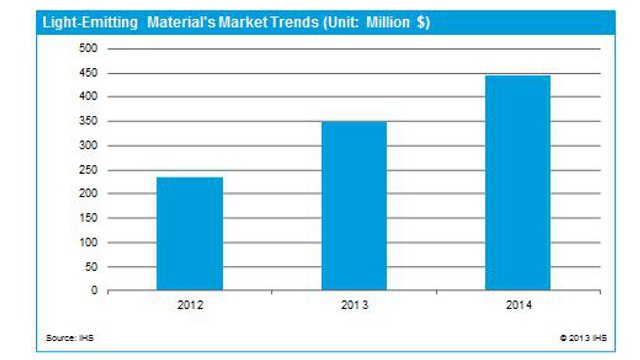 By 2014, Samsung Display but also LG Display, AUO and Japan Display Inc. (JDI), are set to boost AM-OLED panel production or initiate mass production. Given that, light-emitting material makers are expected to compete in a more advanced market environment with increased demand and a broader base of customers, after the first part of this decade where they had depended wholly on demand from Samsung Display.

Three main points are of interest for sustainable investors in 2014:

The LED/OLED market will grow and expand in 2014. Opportunities will abound for established markets and technological innovators that can compete on price and power consumption reductions. The Fund Balance Leading The LED ETF outperformed the S&P, and we are not currently looking to make additions or rebalances, though we will continue to look closely at start-ups and monitor industry wide ASP trends. 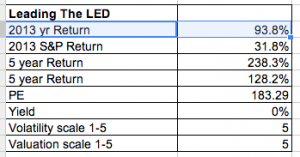