There is a canon among many policy makers and their financial backers holding that essentially all regulations diminish prosperity. Yet, evidentiary support for it is sparse. For example, a recent study Aggregate Demand and State Level Employment published by the Federal Reserve Bank of San Francisco finds:

What explains the sharp decline in U.S. employment from 2007 to 2009? Why has employment remained stubbornly low? Survey data from the National Federation of Independent Businesses show that the decline in state-level employment is strongly correlated with the increase in the percentage of businesses complaining about lack of demand. While business concerns about government regulation and taxes also rose steadily from 2008 to 2011, there is no evidence that job losses were larger in states where businesses were more worried about these factors.

Why is it important to make note of failures to link regulatory action and weakened job markets? And, why so for a sustainable economics blog? Firstly, widespread adoption of this view has been  annointed with the great advantage of conventionality: policy makers can’t be evaluated per se as acting irresponsibly in terms of managing labor market health, or so-called job creation, when they have the same extreme hands-off bias towards regulation (particularly in the environmental category) as the industries they are meant to oversee. Hence real concerns of lack of oversight.

Secondly, we see time and again the benefits for the blue and white collar classes — and thus their local economies — that accrue from sound, evidence-based regulation.  There are indeed costs, and benefits are not guaranteed in each case. Even still, the outcomes and analysis thereof suggest much more benefit for those who prefer Mother Nature over Mother Market.

The state of our hydrosphere and fisheries provide useful evidence and context. One case is a recent story about EPA regulations and fisheries from Alabama, as told by al.com’s John Archibald:

Alabama Department of Public Health toxicologist John Guarisco said the highest number of mercury problems occurred in the southeast part of the state in the black water rivers, where naturally occurring mercury is abundant in the decaying swamps….But mercury also comes from local and global fallout from coal-burning industries and power plants, from fossil fuel exhaust, and from heavy industry.

“It’s a lot better than it used to be because of regulations and things like that,” Guarisco said.

Which is an unusual thing to hear in these parts.

It seems as if all we hear from those running for office – whether for Congress or the Public Service Commission or dogcatcher — is that Alabama must protect itself against “Environmental Protection Agency overreach, environmental regulation and the “radical environmentalists”.

Oh wait. Perhaps those are just the candidates backed by big coal and power.

The truth is, it’s a made up political fight. All it takes is a fish fry to see that it is in all our interests in Alabama to clean up the air and the water so that fish are not poisonous, and that it is safe to breathe and drink and fish.

Back in the 1980s and ’90s, many fisheries in the US were in serious trouble. Fish populations were dropping sharply. Some of New England’s best-known groundfish stocks — including flounder, cod, and haddock — had collapsed, costing the region’s coastal communities hundreds of millions of dollars.

So the government got involved. But, we know that government is always the problem never the solution; so you know what came next.

Or maybe you don’t. In fact, government intervention has been a big success. Many fisheries have rebounded to the benefit of the fishermen as well as consumers.

Fighting climate change isn’t really all that different from saving fisheries; if we ever get around to doing the obvious, it will be easier and more successful than anyone now expects.

Few choices will have simple one- to- one solutions. Regulations often necessarily restrict markets in order to ensure public health. Ultimately though, its not simply a trade-off of quantity of jobs and quality of life. Both can be had and balanced. Tough choices cannot be avoided, however. While “fracked” natural gas can be debatably characterized as a bridge fuel to more sustainable power sources for civilization, its extraction currently conflicts with fresh water supplies to a degree that often goes under-reported. There are demonstrable microeconomic impacts from fracking unaccounted for on the balance sheets of mining firms that still end up on those of the taxpayer, i.e. externalities. Policy makers in drought wracked states like Texas and California know this first hand. Seismic activity in states like Oklahoma drive further concerns. 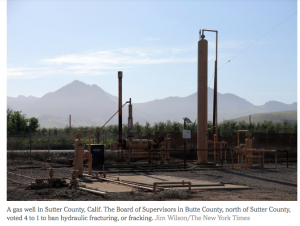 The take home message here is that while very small, often disparate geographically and increasingly socially removed interests can capture economic gains in the short term from resource extraction (free to move on to the next seemingly infinite supply of resource pools), local economies mostly suffer when economics decouple from ecologics. Indeed, for almost all citizens of our planet, who are not part of the globe-trotting corporate class, there is no long term economic health for their communities without ecologic health or long term prosperity for their future generations. Once fertile rivers and fields decimated by pollution are poised to harm the future as much, if not more so, than national debts. The strong dependency of economies on ecologies is increasingly apparent. Evidence based regulation must maintain and sustain that bond. Hard, yet essential work, to be sure.