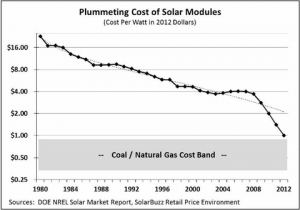 Energy poverty is also a problem in the US.  As states like Ohio abruptly suspend widely popular solar power policies, working poor, middle class families, and businesses see expenses rise. Manufacturers like Honda and Whirlpool joined consumers in opposing Ohio Governor Kasich’s executive order to freeze its program. Additional side-effects weigh on taxpayers.  As more coal is used public health suffers resulting in rising health care costs, and water treatment costs increase too which is also true of  fracking for natural gas. These costs are passed along disproportionately to small businesses hurting them as well as working families.

Do arguments about coal helping with persistent joblessness add up.? No. The industry began to automate via strip mining in the early 1970s. Coal mining accounts for only 0.06% of overall U.S. employment.  As Paul Krugman observed: “Shutting down the whole industry would eliminate fewer jobs than America lost in an average week during the Great Recession of 2007-9.”

And, we must account for the immense harm to our neighbors and their families, home values, and agriculture that results from living  in one of our nation’s sacrifice zones as a recent documentary by the Birmingham, Alabama non-profit GASP makes clear.

We need policy formulations and economic modeling that continue to induce clean tech entrepreneurship. Some examples of the after mentioned are smarter net-metering policies, less regressive tax structures, and  targeted tax breaks for large public/private works that deploy clean technology. Sports stadiums already provide an array of natural experiments, and the results show how taxpayers save huge sums as bond issues typically cover some if not all the costs of building them. Both the Miami Marlins and The Philadelphia Eagles are noteworthy examples among many.

Since 2001, the cost of generating electricity using solar panels has fallen by more than 70 per cent. Many experts report that by 2025 solar will be the cheapest way of harnessing renewable energy. It’s also at or reaching cost parity with coal meaning it can provide electricity that is cheaper than fossil fuels in many regions and situations.

A common bit of conventionality is that with the economy hurting, we can’t afford to build clean energy infrastructure. But, to the contrary, the cost of public borrowing and employment in the US is at multi-decadal lows: now is the time to invest and lock in low rates. This is something we have observed here at this blog many times over the last five years, and we are not alone observing such.

Dr Neil Robertson, of the University of Edinburgh’s School of Chemistry, said: “The plummeting cost means that large-scale solar power is coming to Scotland whether we realise it or not. The key priority is to recognise this, so that we can start planning to maximise the social, environmental and business benefits it will bring us.”