One can easily argue that water is the sine qua non of life. Pope Franicis stated this most eloquently and firmly yesterday in leading the Angelus Prayer. The Buenos Aires Herald reports:

Francis called water “the most essential element for life” and he urged public and private sectors to work together to ensure all people have access to clean, potable water.

“(Water) is a universal and unalienable right for all people,” the Argentine pontiff said. “Humanity’s future depends on our ability to care for it and share it,” he added.

Of course many large industrialists disagree. They seek to become rentiers, or worse, monopolists of water. Take the example of Peter Brabeck-Letmathe, Chairman of Switzerland based global food, consumer staples, and agricultural service provider Nestlé Global. In 2013 he made waves (and not just with his yacht on lake Geneva) by his quote

The one opinion, which I think is extreme, is represented by the NGOs, who bang on about declaring water a public right. That means as a human being you should have a right to water. That’s an extreme solution.

As a result of the resultant uproar Nestlé Global released a publicity video with Mr. Brabeck-Letmathe, along with a set of questions and answers from its publicity department. They contend that his point was

However, he does not believe it is fair that more than two billion people worldwide lack even a simple toilet, and more than one billion have no access to any kind of improved drinking source of water, while in other parts of the world people can use excess amounts of this precious and increasingly scarce resource for non-essential purposes, without bearing a cost for its infrastructure.

To be sure there are many firms, such as the B Corp WaterSmart that are taking on the challenge with an eye towards fair trade and profit as opposed to the mercenary view. Coverage of this firm and others will be the subject of upcoming posts.

It’s difficult to parse the last sentence quoted from the video. Who in the civilized world doesn’t pay a water and sewer bill directly and/or via taxes allocated for infrastructure? And as for the developing world, there can be no doubt that wealthier nations should chip in on a charitable, or least non-profiteering basis i.e. with capped profits, to provide these regions with clean water. Further, this new approach makes no mention of the fact that at the World Water Forum in 2000, Nestlé successfully prevented water from being declared a universal right — all but declaring that local water resources are now targets for the multinational corporations to control. For Nestlé, this means billions of dollars in profits. For the rest of humanity and earth, it means paying up to 2,000 times more for drinking water because it comes from a plastic bottle. Many observers have noted how in countries around the world, Nestlé promotes bottled water as a status symbol. Yet, questions on the quality of the water persist.

Of course, keeping water clean means conservative approaches which permits fossil fuel extraction as well as processing near estuaries, rivers, aquifers, and lakes. What has happened to large portions of New Jersey with its sludge lagoons or ‘Cancer Alley’ in Louisiana where not just American owned firms, but firms from nations such as China are brazenly toxifying the environment with unchecked emissions of methanol?

And, then there are the well known dangers to our fresh water supply presented by fracking, the keystone pipeline, 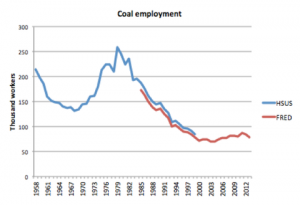 coal mining, and industrial agriculture with its attendant subsidies delivered yearly in the US farm bill. None of which industries, inter alia, provide any significant amount of employment during their boom cycles, and then of course leave befouled ghost towns when they go bust. For example, there was a War on Coal, and as Paul Krugman pointed out, Big Coal won. It automated strip mining:

Basically, it’s a job that was destroyed by technology long ago, with only a relative handful of workers — 0.06 percent of the US work force — still engaged in mining.

None of the oil in the Keystone XL will enter the US energy supply and almost half of US mined coal is sold to other nations. So, most fossil fuel extraction is not about jobs, despite what the owners of Big Coal claim, nor is it about energy independence.

Senator Mitch McConnell, along with his lobbyists and big donors, is out to fight new EPA regulation aimed at transitioning US power source away from coal towards renewable energy. Even in ways outside his purview as a Senator — interestingly his own state of Kentucky, a large coal producer plans to adopt the new EPA mandates. Its clear many Kentucky residents know that the benefits of coal far outweigh the costs.

Lastly as President Obama pointed out this last weekend, the Solar Panels on the Department of energy are not just for show, they save tax dollars and help protect out drinking water from the dirty business of fossil fuel extractions.  Perhaps some polices could be put in place to use the money to upgrade water infrastructure creating long-term, sustainable jobs that preserve the balance between energy security and a clean water supply.