Purpose: There is some controversy in the State about the profitability of the economically targeted investments (ETIs) within the Severance Tax Permanent Fund (STPF). These investments are not required to have “market rate” returns because they contribute in other ways to the economic development and General Fund Revenues of the State. Some Legislators and State Employees are concerned that the economic development advantages of these investments are outweighed by lost performance in the larger marketplace which translates into lost General Fund Revenue. This analysis quantifies the lost STPF revenue attributable to the ETIs and breaks that number down into pieces corresponding to New Mexico’s Private Equity Investment Program (NMPEIP), Film and Small Business Investment Corporation. Finally, it compares the lost revenues to the gained revenues attributable to increased local payroll and gross receipts taxes.

According to Sun Mountain Capital’s survey of program participants, 86.5% of the gross receipts and payroll taxes contributed by the companies in the portfolio are directly attributable – and would not exist without – the NMPEIP. Assuming this number is correct, total taxes to the General Fund contributed by the NMPEIP are: $10,426,018

General Fund Revenues Lost due to ETIs in the STPF
Now let’s determine the amount of General Fund tax revenue from the Severance Tax Permanent Fund that was lost due to decreased returns associated with economically targeted investments.

As of September 22, 2009, the STPF posted a 2.4% annualized return over five years, less than the Land Grant Permanent Fund (LGPF) return by 0.6%. According to the Legislative Finance Committee, more than 90% of this adverse impact is due to the inclusion of economically targeted investments in the STPF, whereas none exist in the LGPF. For the sake of this analysis, let us assume that economically targeted investments account for 100% of the impact, in order not to prejudice our data in favor of the economic development investments.

Currently there are three types of economically targeted investments in use by the STPF: Private Equity accounts for $240.1M in drawn capital, Film $116M, and the Small Business Investment Corporation is at a $45.5M allocation. The film and SBIC investments usually break even, although the SBIC was down $400K last year and is down $5M this year. The NMPEIP is down 12% since inception; I am waiting on their five year numbers for reference. Although the film and SBIC programs constitute a substantial drag on the performance of the STPF, the bulk of the negative impact to the STPF comes from the NMPEIP. However, the NMPEIP is just now emerging from the lowest point in the J-Curve right now, see graph below where the program is now at the 4.8 year mark. 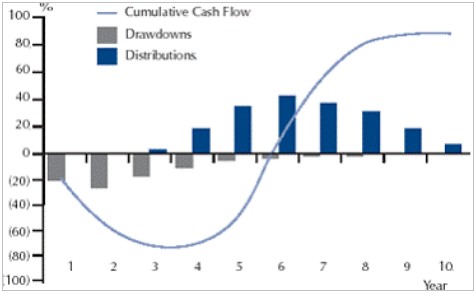 The next five years will likely see improvement in the NMPEIP performance, perhaps resulting in net profitability. It may be unfair to assess an unbalanced penalty to the NMPEIP because of its current losses, which may be substantially recovered over the next five years. Nevertheless, for the sake of this analysis, let us assume that the NMPEIP is responsible for 75% of the negative impact to the STPF, although they only account for roughly 67% of the capital in the economically targeted investment space. Therefore, the impact of the NMPEIP on the STPF returns is 75% of $23,881,568 or $17,911,176.

The STPF contributes 4.7% of its rolling five year average market value to the General Fund. In order to calculate the amount of General Fund revenue that would have been generated by traditional asset allocation, we have to take the amount of capital allocated to the NMPEIP, add in the money STPF would have made if the capital had remained in traditional investments and then take the 4.7% out.

The net drawn capital (not available for other investments) at Sun Mountain is $240.1M. The negative performance impact to the STPF – as calculated above – of the NMPEIP is $17.9M.

$240.1M + $17.9M = $258M which is the amount of capital that would have been in the STPF had it not been invested in NM Private Equity but had been left in traditional investments.

Conclusion: Without taking into account the fact that the New Mexico Private Equity Program is near the low point in the J-Curve, it is clear that the NMPEIP contributes substantially more per capita to the General Fund than the rest of the STPF or the LGPF. This analysis also does not take into account the portion of Gross Receipts Tax, 2.07% on average or $1,809,180, that the NMPEIP contributes to New Mexico municipalities, nor the property tax revenue for which it is largely responsible. Nor does this analysis take into account any multiplier effect at all. Multiplier effects are controversial – as much art as science – and rarely agreed by all parties. However, most economic development analyses concede that there is always at least somewhat more than one GRT transaction per dollar spent within any given economic development district. Brian Birk’s team studied the issue and found that a multiplier of approximately 1.5 is a conservative and generally accepted standard. Applying a 1.5x multiplier to the GRT number, one can add $2,185,000 more to the NMPEIP GF contribution, plus additional to the municipalities. Taking into account all the contributions of the NMPEIP, its positive economic impact turns out to be roughly double that of the rest of the State Investment Council’s investments. To some extent, this is likely to be the case for all of the ETIs, because unless their performance is close to a fifty percent loss, their annual contributions to the State will be larger than most market-rate investments. Of course, assets would diminish rapidly at this rate and with them tax revenue.

Although these numbers reflect the devastating effects of the credit and economic collapse, all investments suffer in macroeconomic collapses. To charge that the NMPEIP performance is only this good because of the collapse in traditional equity markets – as some have tried to do – is unfair. Private equity tends to rise and fall roughly in sync with the larger public markets, but in a less volatile fashion. Over time, the NMPEIP may in fact enhance the STPF’s performance relative to the LGPF’s, because the LGPF’s fixed income investments don’t have the significant upside potential of the NMPEIP’s. Should the NMPEIP realize its theoretical upside, there will no longer be any argument whatsoever about the relative merit of the NMPEIP. We will need to watch these developments over the next five years to the end of the J-Curve to fully grasp the extent of NMPEIP’s contribution to New Mexico.