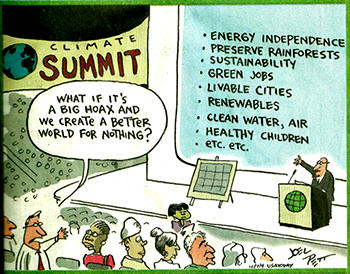 This cartoon, from the front cover of the February 2010 issue of Funny Times, describes the Fund Balance position with respect to Climate Change. We acknowledge that there remains uncertainty in the scientific community about the extent to which anthropogenic CO2 emissions drive global temperature increases. We also regret the polarization of the discussion and the slide into judgmental invective that has accompanied the debate on both sides.

However, we cannot deny the observation that modern mankind does have adverse macroimpacts on the environment. The evidence on this subject is not open to question. From the Pacific Garbage Patch to acid rain to Chernobyl to the dead zone in the Gulf of Mexico, human pollution has damaged Mother Earth in catastrophic ways. It is not difficult to understand global climate change as the emergent property of the various regional macro changes that are already well-known.

Therefore, as the cartoon suggests, the issue of CO2 and anthropogenic warming may well be an esoteric, even moot point. The precautionary principle will require most well-intentioned people to acknowledge the need to restrict global pollution, and not just CO2. Furthermore, the principles guiding the global environmental community, vulnerable as they may be to subversion, are good in and of themselves, and do not require scientific consensus on anthropogenic global warming to warrant action.

It is regrettable that the international scientific community has chosen to focus on CO2 to the exclusion of all the other major impacts of modern techno-industrial civilization. The overemphasis on this one often innocuous molecule has allowed the proponents of global climate action to appear simplistic, propagandistic and even self-interested. Those who overly focus on a cap and trade system that would personally enrich themselves must be recruited to a more holistic regulatory and capital markets strategy that is based on holistic science and balanced capital markets incentivization. Such a system would include taxes, policies and accounting rules on an equal footing with capital markets strategies like cap and trade.

To this end, we call upon the international political, financial and scientific community to reframe the global climate change debate in more holistic terms. A successful regulatory regime will adequately account for the role of other global warming gases, other toxins and other adverse aspects of human ecological impact. Only a holistic approach – which also acknowledges the impact of solar cycles – will achieve a scientific consensus and produce the kind of international system which takes into account all externalities. All “externalities” must be put back on the balance sheet of global industry and investment,  such that capital and trade flows move naturally towards truly clean and green businesses.