“Everything… is very simple, but the simplest thing is difficult… things do not turn out as we expect. Nearby they do not appear as they did from a distance” — Karl von Clausewitz

ONE hears little talk of a potential carbon bubble in financial media and the role of policymakers in its potential formation. Yet, a broad array of business and economic institutions along with professional investors such as Tom Steyer maintain carbon-free portfolios in response to negative long-term trends for carbon-derived asset values.  Asset bubbles typically refer to cases where a group of widely held assets are overvalued as evidenced by appreciation rates and valuation ratios far above their historic on trend averages. This overvaluation then implies sudden, acute drops in value for both the holder of the assets. This effects the broader market as a function of the assets default presence in keystone funds and indices that must reflect markets in composite. Yet, definitions of asset bubbles exist primarily in the vernacular.  Many scholars and technicians argue that buubles can only be recognized post ante. Setting this debate aside, potential equity and real estate asset bubbles discussions appear frequently in the media while the possibility of a carbon bubble is largely ignored. Why? Of these three possible bubbles, which of them present the graver threat to shared prosperity?

Goldman Sachs reported, “the window to invest profitably in new [coal] mining capacity is closing” this past July. According to Bloomberg: “The top 100 coal and 100 oil-and-gas companies had a combined value in 2011 of $7.42 trillion, much of which was based on reserves that can never be used, according to a Carbon Tracker report that first made the case for “unburnable carbon.”

Yet, clean coal programs continue as policy makers prop-up the sector — even as the market sells off. Will this soon-to-be-past be prologue for oil? Statoil, a sustainability leader that Fund Balance has followed from some time, quoted in Bloomberg:

Statoil considers climate change a key corporate risk which will have industry-wide impact,” the company wrote to investors. ‘We consider our portfolio of assets to be fairly robust with respect to climate regulations.’ 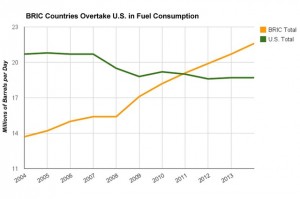 As we see above fuel consumption is flat in the US and growing in the BRICs. Given that China and India in particular are investing heavily in renewables, how likely are their rates of consumption to accelerate? Looking out, prospects for revenue growth curves for Big Oil flatten at best due to higher projected carbon prices.

A carbon bubble and its twin risk vector climate change represent serious long term risk to a great many more citizens and their wealth, well being, and security than putative stimulus from Quantitative Easing (QE) and any attendant bubbles. So, what to make of the talk of equity asset bubbles? Currently, ~20% of US citizens own ~80% of the stock market and wages over the last 20 years have been flat to declining. This coupled with the decreasing  share of productivity to 90 percent plus of US workers beg the question: for whom are potential asset bubbles so dangerous?

Certainly many households are dependent on their comparatively minimal stakes in equity markets. For example, billionaires can buy low and sell when bubbles burst, but those living off dividends and capital gains to pay for food, medicine, and shelter cannot. Further, income inequality, long-term under- and unemployment mean fewer and fewer labor force participants accumulate enough monthly income to set aside sufficient savings through asset market participation. The great complexity and increasing lack of transparency as typified by LIBOR and ISDAfix insider trading shuts out the majority of non-professional investors and even many smaller scale professional ones. The ranks of Wal Mart associates and pizza-deliverers swells. Consequently, large swaths of laborers lack both the information and capital  to gain access to the phenomenal growth and opportunities afforded to the shrinking few within the hedge fund and luxury class.

Moreover, when QE ends this will signal uptrending inflation which in turn will mean rising demand, congruent with stronger earnings and prospects for large components of blue-chip indices. And, even if over-bought, new iwill arise in a sell off, long term positions won’t need to change all that much. After all, as superstar investor Henry Kravis points out consumer spending is 70% of the US economy which is the world’s largest. So very plausible demand-side scenarios exist whereby QE does not usher in a long-term bear market.

Looking at real estate, some see a bubble inflating among certain major urban markets. In aggregate though the real estate market has mostly trended sideways. Existing home sales are still below 2007 levels as are new home starts. More people are renting. So while property owners can command handsome rent appreciation the market for new homes is flat on a broad basis, so concerns of pockets of bubbles in real estate are basically marginalia.

One of the benefit of the Dot Com bubble was quite literally its network effect: the US economy developed its internet infrastructure which subsequently laid the foundation for Google, Facebook, Twitter along with an entire generation’s worth of capital formation for savers and investors. Its legacies include cloud computing, social media, big data, etc. And, even amid the irrational exuberance driven carnage of the Dot Con Bubble burst much essential research and development was performed weeding out many shibbolleths and flawed business models.

Are all bubbles are alike? Probably not.

On the other hand, what of the legacy of bursting of the housing bubble? So far, all we have is enormous gains for a handful of rentiers, the continued grind of the Lesser Depression and interest rates that remain low at the Zero Lower Bound, which will simply will not co-operate with those that would argue primarily from authority that they must be inflationary; consider again existing home sales:

Lastly, what were reality-based economists calling for to bring us out of the Lesser Depression: fiscal stimulus aimed at upgrading US infrastructure into an era of greater efficiency via renewable energy and less pollution, a pernicious form of inefficiency. Regulatory capture allows for its cost to be shifted onto the public accounts and thus obscured accounting of publicly trade firms.

For evidence of the inefficiencies wrought by pollution, just look at firms leaving China due to rampant pollution or at the points shaved off its GDP by endemic air and water pollution. On the positive side, China’s future generations will reap benefits from its investments in the clean and renewable energy now. The US needs to focus on those benefits for its future generations by borrowing cheaply while there is still time to build infrastructure and cultivate a new breed of social institutions. These steps will lead to a healthier and more prosperous future than cuts to food programs for those living in poverty now.

So again, for whom are equity and real estate bubbles forming? Put another way, are bubbles relative? Where is the inflation from QE thats been predicted for the last 5 years? Last word to economist and former treasury official Brad DeLong:

the past seven years or so–not to 58.5%. And we would have expected the collapse of people’s retirement savings either in housing or in stocks in 2008 to have led many Americans to postpone retirement. Given the collapse in the value of retirement savings and their impact on desired retirements, I see a healthy American economy today as one that would still have the same adult employment-to-population ratio of 63% as the economy of the mid-2000s.

(h/t econintersect for the housing graphs)