Solar power stocks have shone over the past year. After four years of decline the industry experienced vigorous growth in 2013. The first growth spurt in the early 2010’s was propelled in large part by European incentives which induced component and material shortage in 2007-2008. This pushed solar stocks to record  highs and to a subsequent bust the next year. The main driver for the market-wide collapse was significant state-level investments in China that led to a large surplus from output from some 500 Chinese companies that produce modules, wafers, and cells. The Chinese investments fostered an overcapacity in production, which hit the the majority of manufacturers in the space. Most non-Chinese manufacturers were then quickly eliminated from the industry. Weaker Chinese companies also fell to price pressures while other participants wanted out of the business. All the while, start-up manufacturers flooded the market with an ever lower priced inventory predictably spurring the aforementioned bust. 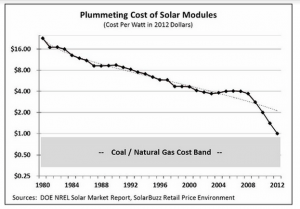 Yet now the solar power industry is poised for another solid year in 2014. Many doubtful observers look to the expiration for tax credits in 2016 as the next great shake out for the solar industry. As the National Geographic Energy Blog explains:

Farther down the timeline but perhaps more ominous is the scheduled expiration of the federal investment tax credit (ITC) that solar enjoys. Implemented in 2006, the ITC can be worth as much as 30 percent of the cost of a project, large or small, and it’s due to expire at the end of 2016. The Obama administration’s 2015 fiscal year budget would replace the investment tax credit with a production tax credit at the end of 2016, meaning that a solar project would benefit only after it is built and producing power.  The production tax credit  “simply can’t address the upfront costs of fuel-free solar projects,” said the SEIA in a statement, “and we believe the Administration’s sudden, 180-degree shift in tax policy could have devastating consequences on the future development of solar energy in America.”

In the meantime, solar power continues to absorb its share of the US/EU energy mix. Paul Krugman writes:

In fact, it’s possible that solar will displace coal even without special incentives. But we can’t count on that. What we do know is that it’s no longer remotely true that we need to keep burning coal to satisfy electricity demand. The way is open to a drastic reduction in emissions, at not very high cost.

The Fund Balance Motif-ETF, Here Comes The Sun performed quite strongly over the last year. 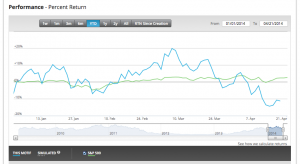 — while its valuation and volatility remain very high relative to market levels.

Key industry benchmarks like the Guggenheim Solar ETF continue to underperform our “Here Comes The Sun” ETF, though we acknowledge solar power macrotrends will converge on consolidation, profit-taking, and planning for contingent, long term regulatory risk. 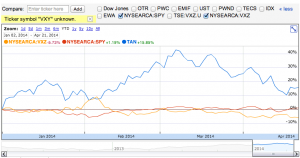 Even still, in the long view, the popular media overstates most technological concerns regarding solar power as an asset sub-class. Investors that buy the logic of imminent technological constraints do so at their peril: As one commenter at Seeking Alpha wrote last week:

Look up peak load following and base power generation. Cloud banks don’t shut down solar panels. The sun doesn’t have to be directly overhead to produce power. Power demand is lowest during the night and early morning. Solar is a supplement to generated power sans a storage solution, and there are a number of storage solutions being worked on and underway now. The more solar you have, the less fossil power you’ll need. Power companies adjust their load continuously all the time, no matter the source. T&D infrastructure is paid for by the power companies from revenues. Power companies have figured it all out, even if [some investors] you haven’t.

At Fund Balance we recommend solar power asset exposure as indispensable to any long-term, growth oriented impact investment strategy. And perhaps more importantly, as an essential means to mitigate risk from increasing instances of stranded carbon based assets such as coal and bitumen.